Ask about costumes and props here. Please read the FAQs first before asking questions -- your question may have already been answered!
Forum rules
Post Reply
13 posts • Page 1 of 1

Looking to buy or build sandtrooper backpack. Need help with this project. Have looked on sandtrooper garrison and found nothing that helped me. Looked on ebay, nothing there. if someone makes these iI would be happy to buy one from you. Also are clone,stormtrooper and sandtrooper boots the same?
diu in imperio
Long live the Empire
I am from the Empire, I am here to help. 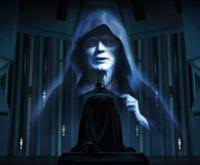 Go to their forums. There is a section on just the backpack. You'll find lots of threads on scratch building a field backpack.
Brooke
TD 1148
Great Lakes Garrison
Top

The vast majority of sandies all build our own packs. You can either go for hyper-accuracy or completely custom, as the decree hasn't come down that all packs must be film-accurate (yet

). Mine is all custom and the hardest part was the electronics I decided to install.

It's much more fulfilling to build your own, and there's a certain thrill to being asked "dude, what did you do for [this or that feature]?!"

But the basis of my pack was two Sterilite boxes that I spray painted and zip-tied together onto a PVC frame that I built so that I could stand it upright. You can see pics of it in my Sandtrooper Build thread:
http://www.greatlakesgarrison.com/forum ... =85&t=9341

Four ½" elbow joints, and four T-joints along with some PVC cement, and all cut with my miter saw. The frame was the easiest part, and I'm not really a "builder."
Top

So back packs do not have to be film accurate? Just the rest of everything does?
diu in imperio
Long live the Empire
I am from the Empire, I am here to help.

There's a difference between "film-accurate" and "canon" and oftentimes there are extensive and sometimes contentious debates between them.

The tentative requirements (published on mepd.net for public viewing) require the following at a minimum:


- White Sandtrooper (or modified Stormtrooper) armor, made in ABS, HIPS, or Fiberglass.
- Black Gloves. No particular material, but must cover the wrist and not have any visible strapping.
- White, ankle high, laceless, Stormtrooper boots. The boots are usually made from leather or vinyl, with small U-shaped elastic sections on either side of the ankle, and an approx. 1" heel. Typically CABoots or Mark Cheng high-top design, but also jodhpur boots painted white. "Elvis" Boots or Mariachi Boots are not acceptable.
- Black undersuit, either one-piece or two piece. Non-textured material. Commonly used items include "UnderArmour" or "Starter" warm-up suits, or dance unitards.
- Dirt, accomplished by a number of painting techniques. Most common & accurate being a multi-layer treatment of either tempera, or matte acrylic paint, followed by one or more layers of fuller's earth. Other methods include, but are not limited to; Spray paint & sanding (usually multi-layered), application of sand or actual dirt in place of "Fuller's earth" and other types of dust, charcoal, etc.
- Pauldron (Black, Orange, or White) made from vinyl or leather. Gray is not acceptable, as it is not canon.
- Ammo pouches. Two or three in total, made of leather, canvas or vinyl. Worn either at the hips or left shoulder, opposite of the pauldron.
- Flat rectangular detail, with smaller horizontally oriented rectangle centered on width, and towards the top of the larger rectangle, on abdominal plate. (On stormtroopers this is the "buttons & ridges" part).
- Diamond Knee plate. Six sided (hexagon) mounted onto a five-sided "diamond" shape, with a point on the bottom. This plate is located on the wearer's left knee, attached to the shin part of the armor.
- Flat green helmet lenses, made from lighting gel material, green welder's mask face shield, acetate, or similar product.
- Weapons. MG-34 (DLT19), Lewis Gun (T21), MG15 (unnamed in SW galaxy), or Sterling SMG (ANH Style E-11). These weapons may be scratch-built, resin cast, hyperfirm rubber cast, vaccum-formed, or real demilitarized guns. Hasbro E-11's are acceptable with or without modification.
- No "drop boxes" (small rectangular parts attached to stormtrooper's belts, above the thigh).
- No black lines in grey teardrops, traps, or vents of helmet.
- No rear belt O2 canister.
- No E-11 Holsters.

The hyper-accurate pack is required if one wishes to be considered "MEPD Deployed," which I personally don't. I have no real desire to achieve any costume's "Elite" status, so my backpack was thrown together in a way I wanted it to look.

Hell, my lens isn't even green!

And I personally think the "fuller's earth" bit is a stretch since nobody really explains what it is, where to get it, and why it should be given preference.
Top

Well what is acceptable to join the 501st? any home made version, or movie accurate?
diu in imperio
Long live the Empire
I am from the Empire, I am here to help.

squadleader wrote:Well what is acceptable to join the 501st? any home made version, or movie accurate?

Hey thanks that should work out real good.
diu in imperio
Long live the Empire
I am from the Empire, I am here to help.

Crimson wrote:And I personally think the "fuller's earth" bit is a stretch since nobody really explains what it is, where to get it, and why it should be given preference.

I only used it on Kim's Sandtrooper because another Sandy gave me some bags of it for free.

I heard it's some sort of art medium that's actually a real clay in powder form. Comes in different colors. We mixed a few for Kim's suit. The reason I prefer it on Sandtroopers (personally) is when you touch it, it has real grit, because it is real, and not paint. Various painting options work for various types of costumes. For example on some costume pieces, airbrush paints are the way to go, but on some Sandtroopers I've seen with airbrushed paint jobs it makes them look too fake in my opinion.
Top

I just learned more in those two sentences than from all of MEPD and their forums combined.
Top

A little of it goes a long way on a suit. Kim's whole armor and pauldron and shoes were done with probably 1 lb or less of the stuff. I put it on with one of those sponge brushes, and then you use (unscented) Aqua Net hair spray and it adheres it to the plastic...... Don't ask me, the guy who gave me the Fuller's Earth told me thats how you attach it to armor and it does work fine. I still have some if you want to use it on your new suit, Rome.
Top
Post Reply
13 posts • Page 1 of 1

Return to “Costume Resources and Questions”